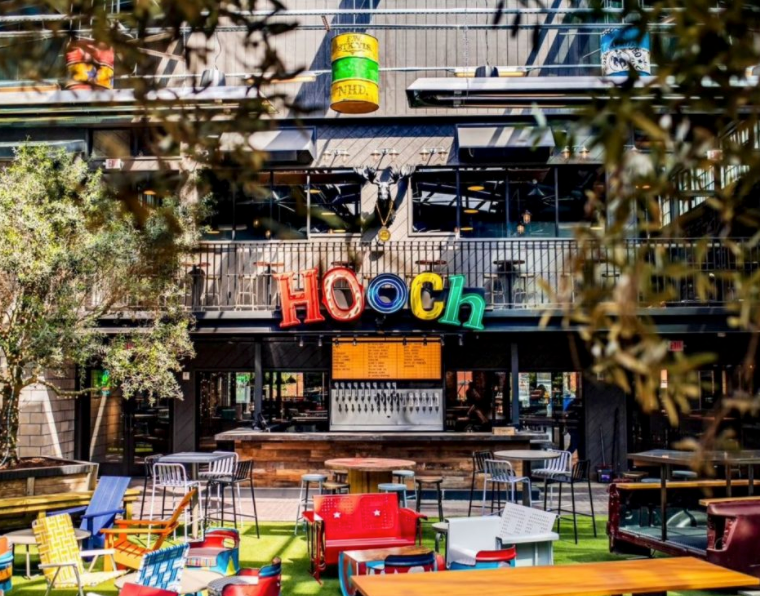 Where to drink in Fort Worth right now: 5 best new bars for September

A fresh new round of bars has poured into Fort Worth and surrounding areas, from Parker County to Trophy Club and hot spots in between. Bigger seems to be better with this bunch, as most of these new establishments feature multiple seating and lounge areas along with massive patios and, in some cases, live music. Most are also open daily, and early at that. As the summer solstice comes to an end, a new season of sunset sipping is about to begin. Here are five new local bars to hit right now.

A former dry ice factory has been transformed into a modern, independent hotel in the heart of the Fort Worth’s Cultural District. Opened by local entrepreneurs Jonathan Morris and Allen Mederos, Hotel Dryce (named one of "the world's most exciting hotel openings" by Forbes months ago) offers 21 boutique guest rooms, each with views of Dickies Arena and the museum district. At lobby level sits one very hip cocktail bar, where potted cacti and colorful cowboy photography make a statement against dark blue-hued walls. Lounge seating and patterned rugs dot the concrete floor. Outside, an L-shaped, string-lit courtyard features pillowy rocking chairs and a fire pit filled with smoking dry ice inside of flames. Try the refreshing Coco Gordo made with coconut-washed vodka, lime, yucca, and sparkling mineral water; or the cleverly named Dryced Tea with whiskey, smoked black tea, and orange peel. Open daily at 3 pm.

Proving this isn’t their first rodeo, Second Rodeo Brewing has stampeded into the Fort Worth Stockyards with lots to talk about. There’s more than 14,000 square feet to roam, including tons of patio space covered by a retractable roof, multiple bars, truck bed booth seating, Adirondack chairs, and even an upper level homage to Folsom Prison (made famous by Johnny Cash’s visit and resulting song lyrics) complete with cafeteria tables. Guests can hear live Outlaw and Texas country all day long along while sipping Second Rodeo’s rotating beer selections served straight from the barrel. Located in Mule Alley, the bar also serves dressed-up cheesesteak sandwiches, nachos, and chicken wings via counter service. Try one of the craft cocktails on tap, like the Grapefruit Ranch Water or Rosé Sangria. Open daily at 11 am until late night, except Tuesdays when they open at 4 pm.

If there’s one thing Aledo needs, it’s more spots to grab a bite and knock back a cold one. Chef Stefon Rishel — the culinary brains behind Fort Worth’s acclaimed Wishbone & Flynt — has come through. He, along with his Trident Restaurant Group partners, opened Parker County Ice House this month in nearby Willow Park. Cold beer? Check. Gourmet bar grub? Check. Live music? Double check, because the management here is bringing in both local and national acts for free and ticketed shows on the outdoor stage. The entire establishment was built from the ground up and can accommodate more than 200 guests. Expect lots of shaded patio space with colorful seating areas, outdoor games, and local craft beer. Note that during concerts with big name acts, general admission is standing room only outside, with walk-up bar service. Parker County Ice House is open daily at 11 am until late night.

From the folks behind The Tipsy Oak in Arlington and the short-lived Southside Rambler in Fort Worth comes a new watering hole for tony Trophy Club. Opened in July in the former Breadwinners space, The Trophy Table offers a big menu of food and cocktails along with weekend live music. Inside, cushy blue velvet barstools line a long sleek bar, where mixed drinks like the Texican — made with TX Whiskey, Mezcal, and grapefruit juice — are shaken for patrons. There also are a couple of covered patios and an upstairs lounge area where folks can hear hit music, kick back in plush loveseats and armchairs, and pose for selfies by neon backdrops. Open daily at 11 am until late night.

It’s wine time in Roanoke now that Wine:30 is open in the heart of the town’s historic Oak Street. Offering wines by the glass, bottle, or flight, the bar has a focus on Texas wines but also offers wines from other popular regions. A handful of craft beers are available, too. Street-side patio seating provides views of Roanoke’s bustling dining scene, while interior seating is cozy and quiet. Note that charcuterie boards are also available. Open daily at 1 pm, and earlier on Sundays at noon, just in time for mimosas. Closed Mondays.