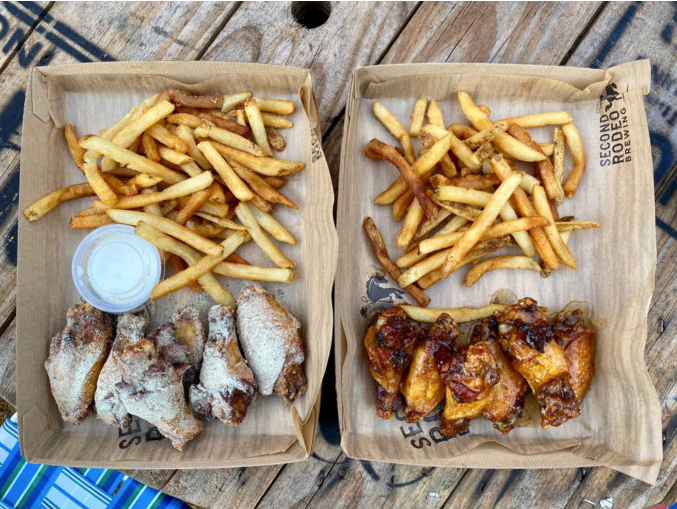 By now we are familiar with voice actors from mattress store commercials who boisterously inform us viewers that the huge sale is Monday, MONday, MONDAY! You probably just mimicked some variation of that in your head as you read that, but that’s exactly the hype that the Stockyards’ latest destination demands.

The trope “there’s something for everyone” can easily be said about Second Rodeo Brewing, which sits between another Mule Alley newcomer, Side Saddle Saloon, and Marine Creek.

Second Rodeo’s carnival-like atmosphere is heavily inspired by both kinds of music.

A 14,000-square-foot one-stop shop with multiple bars, food options, expansive patios, a brewery, an upstairs beer hall, and a stage for live music, Second Rodeo presents itself as a C&W carnival. In the front of the house, you are flanked by fermentation tanks on the left, and to your immediate right, there’s an assemblage of portraits, candids, and mugshots of pop culture’s most iconic outlaws adjoined by a makeshift jail cell that probably doesn’t allow for conjugal visits but plenty of Instagram photo-ops.

When you slide in front of the downstairs bar’s impressive tap lineup that not only includes Second Rodeo’s house brew but also a salute to other local craft breweries, go ahead and order one of their own. Standouts include the Mex-Tex Mexican lager and Beard Science’s Lemon Cucumber sour. We were fairly pleased with them and every other beverage the bartenders poured for us.

Second Rodeo features its own brews in addition to many local favorites.

If the quality of beer seems of higher standard than most, that’s due to Second Rodeo’s fifth-generation German brewmaster Dennis Wehrmann.

If that name sounds familiar, it’s because he was the founder of McKinney’s Franconia Brewing Co., which was arguably the first craft brewery in North Texas, ahead of the wave that followed after laws were passed making it easier to open breweries. Wehrmann is a purist when it comes to beer, adhering to a strict German purity law — water, hops, and barley — while allowing for slight alterations in ingredients to augment the flavor of the beer.

The décor certainly looks lived in at Second Rodeo.

The bar’s entrance plays like a church foyer for what’s to come. With a sacrilegious beer in hand, walking into the expansive indoor-outdoor patio eventually leads to the nave, where the congregation meets. One can’t help but glance upward to breathe it in, and the roof is retractable when the weather dictates. A cluster of mismatched tables and chairs loosely faces the direction of a stage that will seldom, if ever, be empty due to the promise of live music every. single. day.

Here, in this cowboy cathedral of sorts, is where customers will order food from a walk-up window that seems awfully similar to another outdoor bar, one that originated in Dallas with locations now in The Colony and Houston. Anyone heard of the Truckyard? Yep, Brain Storm Shelter is the same ownership group, now with an obvious Western twist on their first Fort Worth concept.

Truckyard’s famous cheesecakes and nachos made the menu here, though the biggest addition at Second Rodeo is the wings. Whacky selections such as the citrus-glazed and Cuban-spiced Mojo or the Lime in the Coconut (lime- and coconut-glazed with graham cracker salt) bring a tropical flavor to this swing dance. Or combine brunch and wings with the chicken ’n’ waffles[,] slathered in a maple-bacon jam and dusted with waffle crumbs. Hell, the Mexican Holy Mole is worthy of high praise for its delectable mole sauce, chile spices, and chocolate powder.

The outside patio, complete with games, features a bar pieced together from an old trailer, where a Big Tex-like neon figure keeps watch. The double-sided fireplace will surely be a centerpiece for guests during chilly months when you might feel pretty outdoorsy by drinking next to an actual creek — just don’t nosedive into its stagnate waters.

Although Hank Williams wasn’t from Texas, one could imagine his ghost, slightly tipsy, sitting in the balcony of the upstairs beer hall watching the band, having a hoot of a time.